One of the main shortcomings of the spelling dictionary is that the words are given in two, sometimes three variants. 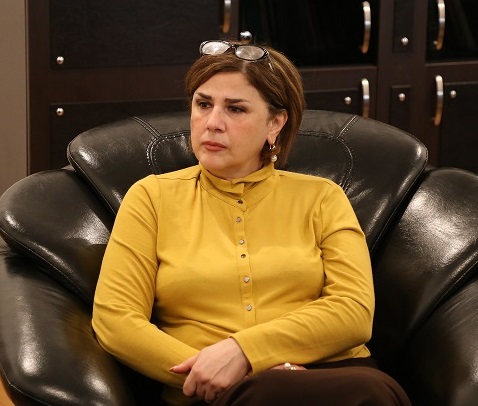 Interview of Afag Masud, Director of the Translation Centre under the Cabinet of Ministers of the Republic of Azerbaijan to “Report”

‒ Frankly, our “Spelling Dictionary”, being in use is in such a position that it has become irrelevant to say any opinion on the question of its status. We all know that a spelling dictionary is the highest language tool that reflects the correct description of the words that make up the wordstock of the national literary language, and it is the native book of the language. Here the situation is entirely different, and I do not understand why this book, which is considered “the mother” of the state language, that is, a kind of basis and mirror of the language, is like this.

First of all, let me start by saying that this book, which is supposed to spell words correctly, has thousands of misspelled words and wrong explanations of meanings of words. The declension of these words is also included in the dictionary, and it is inexplicable for what purpose they are included in such a dictionary.  Here you can find thousands of terms, names of drugs and chemical elements that are not used in everyday life and social life, as well as their declension is given here. Another absurd aspect of the matter is that the spelling of these terms, which are not strictly related to this book, is incorrectly written:«qasteroloq», «qamma-fraza», «aximiya», «akredititassiya», «qamma-radiassiya», «qamma-«fakoliz», «fazmetr», «fakoanafilaksiya», «feldeger», «fanerozey», «fasilitatoluq», “beüz», «frambiziya», «franşız», «ftorasenat», «geodezik», «genetik-minerologiya», «genetik-avtomatik», «indefrent», «indoksikasiya», «ionazasiya», «ionazator», «geoloji-hidrogeoloji», «gibbs», etc.  Sometimes there are fictional terms that do not exist at all, and it is not clear why this is done. Another shortcoming of the dictionary is that it is artificially filled with thousands of unnecessary words and phrases, as if to increase the number of pages: “fırçatutan”, “fırçavarı”, “fırçavarılıq”, “fırçayabənzərlik”, “fırçayaoxşarlıq”, “fırçaşəkillilik”, “çəngələbənzər”, “çəngələbənzərlik”, “çəngələoxşarlıq”, “çəngəlvarılıq”, “çəngəlşəkillilik”, “boruyaçıxan”, “boruyaçıxma” and so on.  The vast majority of words in the dictionary are repeated over and over again with these unnecessary suffixes (-oxşar, -bənzər,-şəkilli), which are definitely added to the end of words. Most of these words that had been excluded from the dictionary were included in the “Unnecessary words and word-declensions” column of the classification table prepared by the Translation Centre. In this column, you can find everything from tribal names of African countries, their instruments and tools, exotic plants and seeds, non-existent peoples and plants, names of people, drinking and cities, foreign cars, foreign actors, movies, theatres, novel heroes, medieval political movements and parties, markets, shops, vulcanizations in any remote region of Russia..., you can find here anything you want. The placement of human, city, village, settlement and country names, music, song and dance names of some countries in the spelling dictionary is, of course, a serious shortcoming, and these words are placed in the column “Words with Spelling Defects”, because they were given with small letters.

The dictionary is also full of thousands of unused, difficult Arabic, Persian, Russian and other foreign words, as well as composed words consisting of several words, in the length of a sentence. Which one should I say? There are hundreds and thousands of such “words” in the dictionary. There is no scientific or logical explanation of putting these expressions together in such a way, or giving with a hyphen to make them look like words. Other misunderstandings are the inclusion of hundreds of words that have been misinterpreted or distorted in order to make new words, as well as sounds created by various animals, birds, objects, and so on in the book, which is used in compilation of educational means and as a handbook for correspondences at state organizations. Are they words? Earth and life are full of sounds. Each person can produce and express every sound that he/she hears. Does this mean that all existing sounds should be included in this language guide? Dog barking “ham-ham”. Is it an Azerbaijani word? Besides, what does it mean to refer these words to a person? In general, there are words in the book that cause the reader to have deep doubts about the literacy of the authors of the book and about their thinking. One of the other and major shortcomings of the dictionary is that the words in this book, which must have a single and correct spelling, are given in two, sometimes three variants. There’s “alaf” (grass) and “ələf” (grass), “qızıl” and “altun” (gold),  “kompüter” and “kompyuter” (computer), “ictimaiyyat” and “ictimaiyyət”  (community), “ayıb” and “eyib” (shame),  “kollec” and “kollej»” (college.) There are enough words in the dictionary whose spelling is given in  two or three variants. Now imagine that teaching aids, tests ‒ questions and answers, as well as other language and teaching sources, official correspondence, etc., are prepared and drafted relying on this dictionary.

- When will the new "Spelling Dictionary" being prepared by the Centre be published?

- We are preparing a completely new dictionary. It will be a collection of pure literary words of the Azerbaijani language, called “Dictionary of the Azerbaijani Language” or “Practical Azerbaijani Spelling Dictionary.” The Centre is working on a new program to collect words that are not included in this dictionary, as well as newly formed words. This program will play the role of a flexible resource in finding and collecting new words that are already used in different fields of activity throughout the country. It will be constantly updated through collecting and presenting new words. Therefore we are not in a hurry. At present, more than 40,000 words excluded from the dictionary are being processed and archived according to classification. This process is more difficult, tedious and laborious than preparing a dictionary. Imagine how much time and effort it takes to determine which column of the classification the word is to be placed in according to the degree of defect, or to determine which of the thousands of terms is spelled correctly and which is misspelled. But no matter how hard it is, I think it’s important to complete it. We are planning to publish this classification in book format as well.

-  What realities were discovered due to the  results of work conducted on the use of the state language in government institutions, textbooks and other areas?

- In 2016, the Centre conducted expertise of the application and quality of the state language in translation of the official correspondence and websites of more than 100 government institutions, universities, ministries and committees. The situation, of course, is not heartwarming. With the exception of one or two institutions, neither the use of language nor translation is satisfactory. In twenty-thirty pages of material from some institutions in total more than eighty spelling, lexical, semantic and stylistic errors have been revealed. Concerning the translation, the situation here is even worse. I have said this many times. A diploma alone does not provide a basis for translation. Unfortunately, we still have gaps in this area. The Centre does not have the right to accredit translators yet. An army of incompetent translators who do not know the peculiaritiess of translation serve in the translation centres that you can meet in the streets of the city entitled “Translation Centre.” Unfortunately, this service is used not only by citizens, but also by majority of  government institutions. One thing must be kept in mind: today the attention of the international community is focused on Azerbaijan. The country is developing, changing, strengthening, takes a worthy place in the international arena. As the interest in Azerbaijan grows, the number of users of its Internet resources increases, the interest of audience expands, and the words of the great Aristotle come to mind: “Speak, let me get to know you more.”

- What measures should be taken to close the gaps in the application of literary language in television programs and TVseries? In general, are you satisfied with the books translated and film dubbing in the country?

I have talked about this on numerous occasions. But no results are obtained. Again, on most television channels, the word “layihə” (project) is used by presenters as “lahiyə.” Mispronunciation of the most common, frequently used words is, of course, disgusting: “matasklet”, “pereparat”, “sklet” and so on. The situation with film dubbing is the same. The Centre is not yet able to intervene in these areas, but can only make recommendations. The Centre also sent a letter to the Baku City Executive Power and the State Committee for Standardization, Metrology and Patents regarding the numerous shortcomings in posters and advertising texts, and food labels throughout the country. This indifference to our so-called “mother tongue” is heartbreaking. But let’s not forget that we are probably the only people in the world who call our language “mother tongue.”