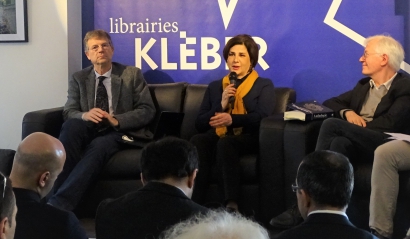 The presentation of this publication was attended by prominent French scholars; politicians; literary specialists; representatives from various European institutions, including the Court of Justice of the European Union (CJEU); the mass media and public representatives.

Ph.D. Mr. Thierry Edmond, the moderator of the event, made opening remarks.

Fakhraddin Ismayilov, Ambassador and Azerbaijan’s Permanent Representative to the Council of Europe, then took the floor. He highly appreciated the book published through the ‘Kapaz’ Publishing House. “For France, this book is a literary window opened to the rich culture of our country.”

Later, AzSTC Board Chairwoman Afag Masud took the floor. Talking about the State Translation Centre’s activity, Masud focused on the greater good produced by Literature that mirrors pain and love shared by all nations and races around the world. “The ancient and eternal kinship of World Literature has in fact always been present with us, forever in our thoughts. The government of Azerbaijan, including the Heydar Aliyev Foundation, continue to do their utmost to promote our literature worldwide,” she added.

Professor, Stéphane de Tapia, Head of the University of Strasbourg's Department of Turkic Studies, made a substantive speech on the geographical location of Azerbaijan, its historical path, culture and language.

Professor Jean-Paul Meyer, Dean of the University of Strasbourg's Department of Philology, in turn shared his viewpoints regarding the short stories in the anthology. He read a passage from Dissertation by Mir Jalal.

Michel Kopp, a notable French writer, spoke about the short stories he was deeply impressed by, reading a passage from The Rabbit’s Death by Afag Masud.

According to Jean-Emmanuel Medina, a critic, the publication is considered to be one of the key contributions to the cultural and social life of both countries.

Albert Wack, Director of the ‘Kapaz’ Publishing House, Nijat Kazimov and Dilbadi Gasimov of the publishing house, in turn, wished the launch of joint projects into the future.

The event was followed by an answer session and cocktail reception.

It is planned to distribute copies of the book to central and university libraries in Paris, Toulouse and Angers, as well as to arrange a series of presentation ceremonies with literary communities in various cities across France.