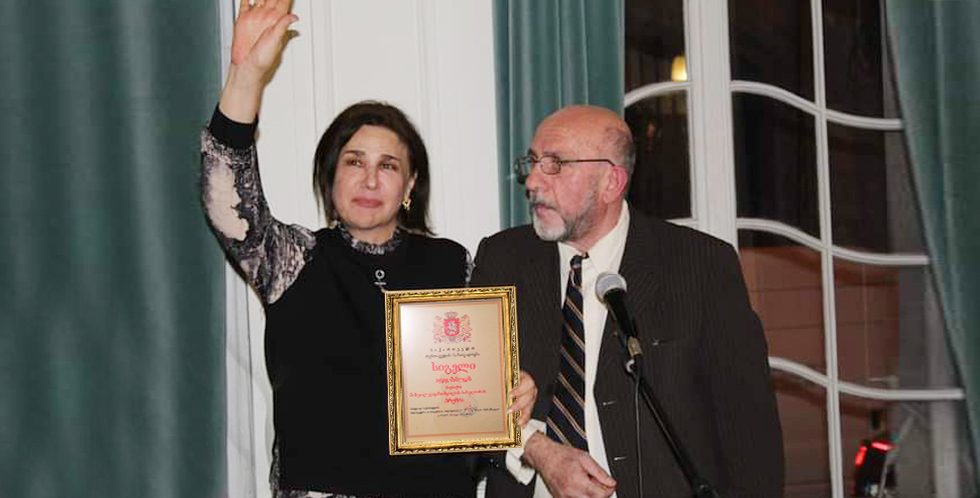 The Writers’ House of Georgia has hosted an event dedicated to the creativity of Afag Masud, the Azerbaijan People’s Writer.

This is an abridged text on the event.

Makvala Gonashvili, a famous poet, Chairman of the Writers’ Union of Georgia, made an opening speech, greeted the guests and participants of the event and spoke about the personality and creativity of the writer. The famous writers and artists of Georgia were part of the event.

“Over the years, many important events and creative evenings have been held in this building, but today’s event is especially bright and memorable, because today’s guest of this historical building of the Writers’ Union of Georgia is Afag Masud, the People’s Writer of Azerbaijan, who has made a great contribution to the rapprochement of Georgian-Azerbaijani literary ties. I am very pleased to present this famous writer, whose works are read with great interest all over the world, the Ivane Machabeli Award, the highest award of the Union by the decision of the Writers’ Union of Georgia.”

David Shemokmedeli, President of the Shota Rustaveli All-Georgian Society, a famous poet, gave detailed information on the author’s work and noted that today the works of Afag Masud are already an integral part of Georgian culture as well: “The foundation of our literary ties and friendship with Azerbaijan was laid by our great classics in ancient times. Today, this cooperation continues successfully with Afaq Masud. First of all, I would like to welcome our honoured guest and express my great pleasure at seeing her among us. The works by Afag Masud are read all over the world today. First of all, I must say that in order to fully understand and appreciate the author’s works, exceptional intelligence and preparation are required from the reader. As a person who has a definite understanding or idea in the field of literature, I can say that Afag Masud is a great writer. Her works have successfully been translated into Georgian and other languages ​​and aroused great interest in the countries where they have been published. This means that world literature has been enriched with a great writer. Valuable works written in the world, including in Azerbaijan, and translated into Georgian should become an integral part of Georgian culture. The works by Afaq Masud are also an integral part of our culture. By the decision of our Award Commission, I want to give the highest award of the Rustaveli Society – the Mikheil Javakhishvili Award to Afag Masud, the People’s Writer of Azerbaijan, for her great contribution to literature.”

“First of all, I must say that writers like Afag Masud create a new stage, a special era in literature. And they define the main directions in this field of activity. I consider this meeting as a continuation of the ancient literary and cultural ties of both fraternal peoples and one of the most valuable moments of this history, which we always remember with pride.”

Bagater Arabuli, Deputy Chairman of the Writers' Union of Georgia, a celebrated poet:

“This meeting is, in fact, a celebration of friendship, kinship and love. Afag Masud, whom we have invited today, is one of the most outstanding and beloved writers. At the same time, as the head of the Azerbaijan State Translation Centre, she has been doing a great job by promoting Azerbaijani literature worldwide and world literature in Azerbaijan. I should also especially note the special role and invaluable work of Afag Masud in the creation of the Azerbaijani section at the Writers’ Union of Georgia several years ago.”

Gocha Kapanadze, Director of the Rustaveli State Theatre, Laureate of the State Prize of Georgia, Iura Popkhadze, Professor of the State University of Arts, Nino Sasanava, a famous poetess, head of the “Zghvauri” Literary Association and the editor-in-chief of the magazine of the same name, Bela Keburia, a famous poet, and Badri Kutateladze, Laureate of the State Prize and a famous writer, went on to make speeches and shared their opinions about Afag Masud’s creativity.

At the end of the event, Tinatin Imnadze, Ilya Kopadze and Lika Kobuladze, the actors of the Rustaveli Theatre, sounded the writer’s famous story “The Death of a Rabbit” and performed excerpts from her play “Woman Under a Train.”